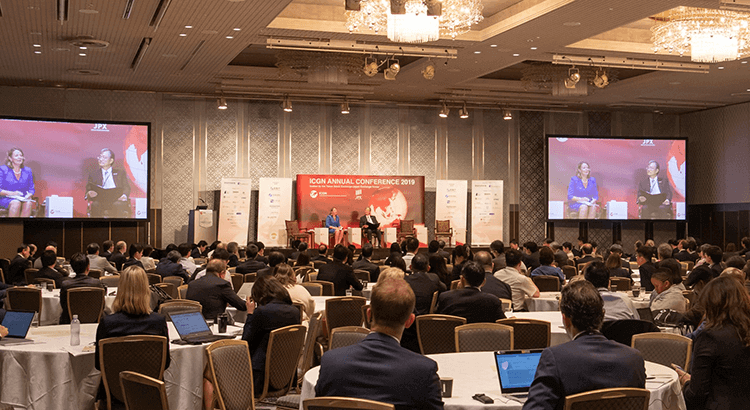 Japanese government and business leaders welcomed foreign guests to the Annual Conference of International Corporate Governance Network (ICGN), held in Tokyo at Hotel New Otani, July 16-18.
Japanese attendees, keenly aware of the huge foreign presence in the Tokyo market, were relieved to hear generally positive remarks from foreigners about Japan's corporate governance reform efforts, and were reassured about their position in a transitioning global investment climate.

Many "welcome to Japan" messages

ICGN, a London-based international body of institutional investors, sponsored the annual conference for 450 attendees, following its annual general meeting of members at the same location.

Tokyo Stock Exchange (TSE) and Japan Exchange Group (JPX) served as hosts. In his opening remarks, Koichiro Miyahara, President and CEO of TSE, explained recent developments in corporate governance and ESG (environment, social and governance) investment in Japan to a large number of visitors from abroad. In closing, Mr. Miyahara made a gentle plug for their return, saying, "We look forward to seeing you when you come back for the Olympic Games."

Guests were warmly welcomed by all of their Japanese hosts. In addition to appearances by top executives from major companies and senior Japanese government officials, including Commissioner of Financial Services Agency (FSA) Toshihide Endo, attendees were greeted by Prime Minister Abe via a video message thanking ICGN for recognizing his government's corporate governance initiatives. Abe pledged to increase efforts to make the Japanese capital market more attractive to foreign investment.