This series of interviews with investment professionals features for the first time a university endowment. Ryoichi Arai of International Christian University (ICU) shares his thinking on investment and his career in asset management. In Japan, university endowments have yet to become major asset owners, but ICU is one of the exceptions and is actively managing its assets.

Thinking of Investment: Maintain the university's financial base

ICU is known for its small class sizes, boasting a student-faculty ratio of less than 20:1 versus 40:1 at some large private universities in the Tokyo metropolitan area.  The cost of maintaining this generous educational system has ballooned and income from tuition fees and subsidies alone is insufficient to cover education and research expenses.  Currently, the university sector is short about JPY 2 million per student over the four years until graduation.  We cover this excess expenditure with investment income from the endowment fund and donations.  The financial structure is similar to that of private universities in the US.

ICU 's fund comprises JPY 51 billion in AUM (as of March 31, 2021), with a target rate of return of inflation +4%.  This target is calculated in order to maintain the university's financial base, as the ICU fund is regularly drawn down to cover expenses related to university facilities and equipment.

U.S. university endowments are investing more in illiquid assets, partly due to the universities' long-term stability and the high predictability of future cash flows.  ICU is also considering increasing including illiquid assets as long-term assets.

Since I began heading its endowment fund, ICU has shifted to a more aggressive investment approach.  Fortunately, the result has been highly positive, with a 25.2% rate of return for FY2020.  Annualized rates of return for the past three, five, and ten years have also exceeded their targets, at 5.3%, 5.3%, and 4.7%, respectively. 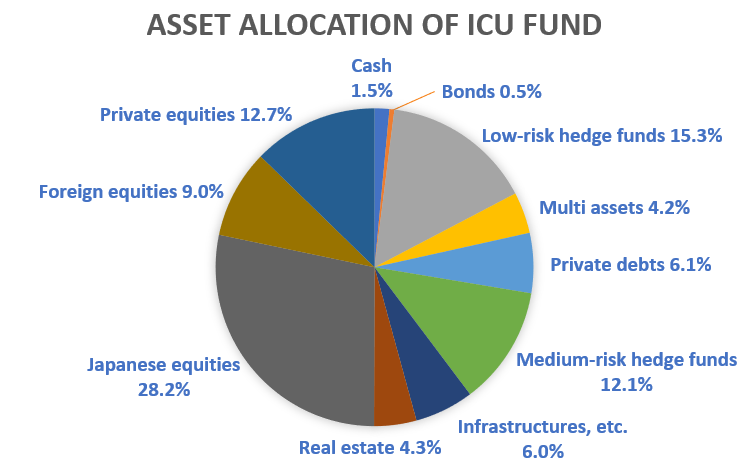 Management History: Break from the herd

When I was an ICU student, I became interested in financial engineering and after graduating in 1988, I started working in the financial industry.  At the time, Japan's "bubble economy" was booming.  The traditional route to work at a financial institution would have been to join a major domestic city bank or a securities firm.  I chose a JP Morgan, a US bank which at the time was relatively unknown to most Japanese.  I wanted work in fund management, but at Japanese financial institutions, you don't know where you'll be assigned.  So, I chose a foreign company that basically hires by department.

A few years later, the bubble economy burst, and domestic financial institutions were severely damaged. JP Morgan was mostly unaffected, however, because our business in Japan was still small.  Furthermore, deregulation in the 1990s allowed foreign financial institutions to enter the pension management business in Japan, and our business expanded rapidly.  When I joined the company, JP Morgan's pension trusteeship amounted to tens of billions of yen, but ten years later, it had grown to trillions of yen.   My career mirrored the company's success, starting at the bottom and building steadily.  To make a profit, you have to break from the herd – that is my personal maxim.

I remember a valuable lesson from when I was a rookie Japanese stock analyst.  In the middle of the bubble economy, stock prices for companies in the First Section of the Tokyo Stock Exchange were twice the theoretical price.  The bubble mentality convinced most people that the Japanese market would create a new theoretical system, but a year later, stock prices cut in half, just as the old theory predicted.  I learned from that experience that the market always returns to “fair value”.

I left JP Morgan Japan after 10 years as CIO, based on my realization that a company's top management needs to change after 10 years or else things will start to go south.  I became an independent asset manager and donated to my alma mater, ICU.  I remembered a senior colleague telling me, "You received 3 million yen in aid from ICU during 4 years of college, so you should return that investment by making a donation in the future”.  I was invited to a donor's roundtable, and when the people involved learned of my background, they asked me on the spot to head management of the university fund.  I thought it would be interesting to go from a position of undertaking management to one of entrusting management, so I accepted the offer.  I want to contribute financially to the development of ICU.