Hiroshi Nakaso is Chairman of FinCity.Tokyo, the Organization of Global Financial City Tokyo, a new organization established in April this year to promote Tokyo as a global financial center.
The following is a speech by Mr. Nakaso at Tokyo-Paris Inter-City Asset Management Seminar on July 8, 2019 (shortened and partly edited with his consent). He expresses how FinCity.Tokyo was organized in Part 1 in IJ’s previous issue, and how attractive Tokyo is as a global financial center to all global players in Part 2 below.

We are not building a castle in the air, because I firmly believe in the potential for Tokyo to function as a global capital market. Let me tell you why.

Despite persistent uncertainties surrounding the global economy, Japan's economy is no longer in deflation and remains on track to sustained growth.

Corporate profitability remains high, which is translated into increase in capital expenditure, which is a key domestic demand driving the Japanese now.

The unemployment rate has fallen to 2.5%, which suggests full employment. The acute labor shortage has driven firms particularly in the labor intensive industries to embark on labor saving capital expenditure. From a macroeconomic perspective this implies improvement in labor productivity.

The acute labor shortage has encouraged more workers to join the labor market. This is most conspicuous in the case of young female workers. Today, about 8 out of 10 women of the younger generation work. This rate is higher than the United States and close to Nordic countries, where the corresponding figure is 9 out of 10.

And, Japan has a trusted hard currency, the Yen, which has a deep and liquid market after the US dollar and the euro.

In addition, we are proud of the high level reliability of payment and settlement systems operated by the central bank and the private sector.

For example, the BoJ-Net operated by the central bank that settles yen and JGBs is operating until 9 PM now. But it is capable of running 24 hours a day, overlapping European and American time zones, without settlement or exchange rate risks. They serve as key financial infrastructure underpinning Tokyo's function as a financial center.

Last but not least, Japan is a democratic country with transprent rules of the law. With Prime Minister Abe's administration now in its seventh year, the stable poliatical situation enables the government to pursue consistent economic policies.

The reasons for this are;

Third, Japanese asset managers are trying to leverage advanced technologies and use of big data. 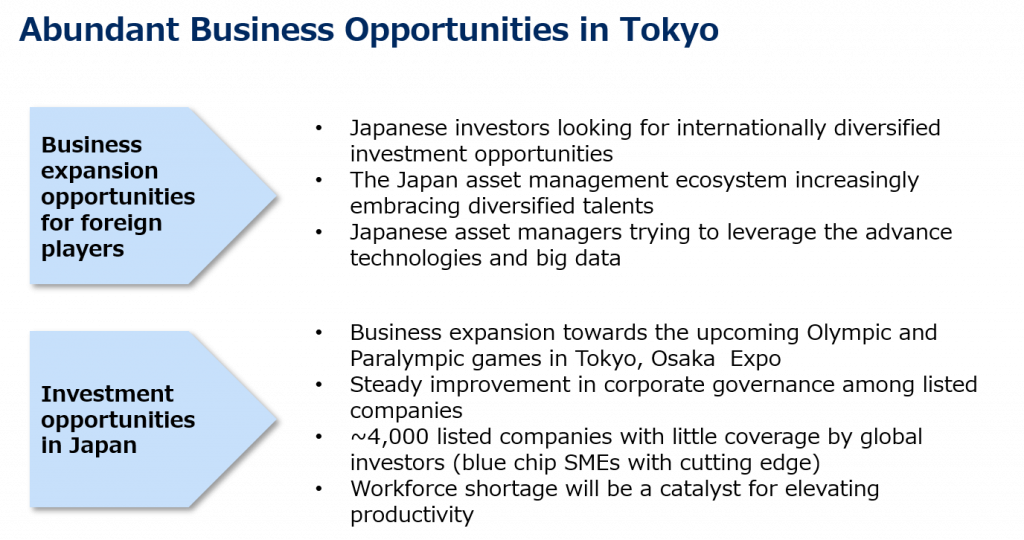 Meanwhile, Japan offers rich investment opportunities as well.  As I have explained, the macroeconomic environment is expected to remain favorable.  The corporate governance structure of listed companies has shown steady improvement.

Among 4,000 listed companies, there are a number of blue chip SMEs with cutting edge technologies. They have not been well known to global investors until now, but will provide excellent investment opportunities in the future. 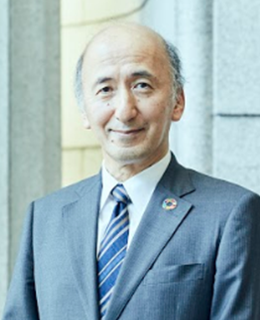