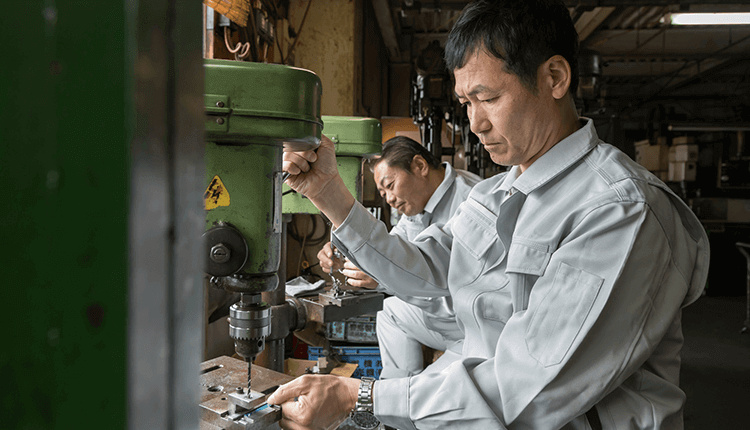 In 1961, Government's Tax Commission pointed out that the retirement reserve fund system had disadvantage in accumulating retirement benefit. The disadvantage was difficult to be resolved within the reserve fund system. One of the problems was that allowance at retirement age could not be fully funded because the reserve fund system accepted accumulation based on voluntary resignations. Another problem was that, if the length of service required for recipient qualification was 20 years, no fund could be accumulated within the prior 19 years. In addition, reserve fund could not reflect life time pension payments.¹ To solve these problems, the desire for legitimized tax-qualified pension scheme was much anticipated.

Tax-qualified pension scheme was quite different from most self-management plans because assets for retirement pensions could be protected, even if the sponsoring company went bankrupt, by using trust or insurance function like Shinagawa Refractories (referred in Chapter 3.3). Pension funds contributed to trust banks or insurance companies and they could not be seized by creditors of the sponsoring company, that was "bankrupt isolation." This was an essential structure to collateralize certainty of pension benefits.

Furthermore, under the contract, reserve funds could not be returned to the sponsoring company and must be used only for pension resource. Trust contract or insurance contract legally secured the system by using a vehicle of trust or insurance function. Tax-qualified pension scheme could build trust because of the mechanism to protect assets even if the sponsoring company went bankrupt.

In this kind of contract, trust law requires "beneficiary agent" ("entrusting manager" in the previous trust law) for unspecified beneficiaries to protect their profits. The agent is often the chief director of general affairs department or human resource department of the sponsoring company, which could be questionable.

In most cases, corporate pension shifted from retirement allowance. The provision of retirement allowance was set by company rules or labor agreement and was filed with the Labor Standards Inspection Office. Tax-qualified pension scheme was based on this relationship and the pension trust contract was formulated to perform the provision as a pension trust contract. A plan was approved as a Tax-qualified pension plan only if the details satisfied tax qualified requirements. Tax-qualified pension scheme was quite different from Employees' Pension fund (to be described in Chapter 5) etc., because it shifted the credit-debt relationship based on company rules or labor agreement to a contract embodied by trust function, without using legal vehicles such as pension funds.

Tax-qualified pension scheme developed smoothly since its establishment. There were various reasons behind it.

It was expected from the beginning to support and stabilize life after retirement, supplementing insufficient public pension, whilst trend toward nuclear families rapidly advanced.

In addition, Tax-qualified pension scheme was expected to improve productivity with the incentive effect of long services. The scheme also strengthened labor-management relationship, in early years, by adopting contributory pension. Tax-qualified pension plans were adopted from labor management needs at its early stage, and prevailed.

In later years, Tax-qualified pension plans remarkably expanded for its accounting and financial advantages. For example, they were used to control cash flow of the sponsoring company, adequately for preparing increasing retirement benefits for aging employees in advance on leveling basis. Otherwise they were used for tax saving or utilized as account settlement measures.

So, Tax-qualified pension plans were introduced as labor management tools in their early stage and later, as financial tools. The reason behind this is that Tax-qualified pension plans had more flexibility in designing, compared to Employees Pension funds. For example, benefits at the time of retirement could be provided from the plan, while benefits before the retirement could be provided from remaining retirement allowance, regardless of retirement rates.

Such plan designing enabled to produce tax saving benefit by using differences of the plan and the retirement allowance for preparing future benefits.² This flexibility design matched the needs of companies and made the plans popular, thus, prevailed rapidly.

4.3  The end of Tax-qualified pension scheme

Number of these plans, which got started in 1962, jumped to more than 92,000 in 1964. During sluggish stock market days in the 1990s after the bubble burst, however, companies were forced to increase contributions and to make up for funding deficiency. As companies were imposed heavier burden, more and more plans were shut down or forced to reduce benefits. In addition, as the majority of the sponsoring companies were small, bankruptcy was not rare. Low funding plans faced issues resulting from insufficient protection of benefit rights.

As sufficient benefit protection became difficult, Tax-qualified pension scheme became meaningless. The scheme was abolished in March, 2012. The authority concerned was the National Tax Agency who tended to restrain excessive tax loss and lack financial stabilization of the plans to protect benefit rights.

However, there seemed to have been more behind this abolishment. Asami Yano, who was the head of pension bureau of Ministry of Health, Labor and Welfare at that time, referred to this situation, hinting on jurisdictional dispute among parties involved.³