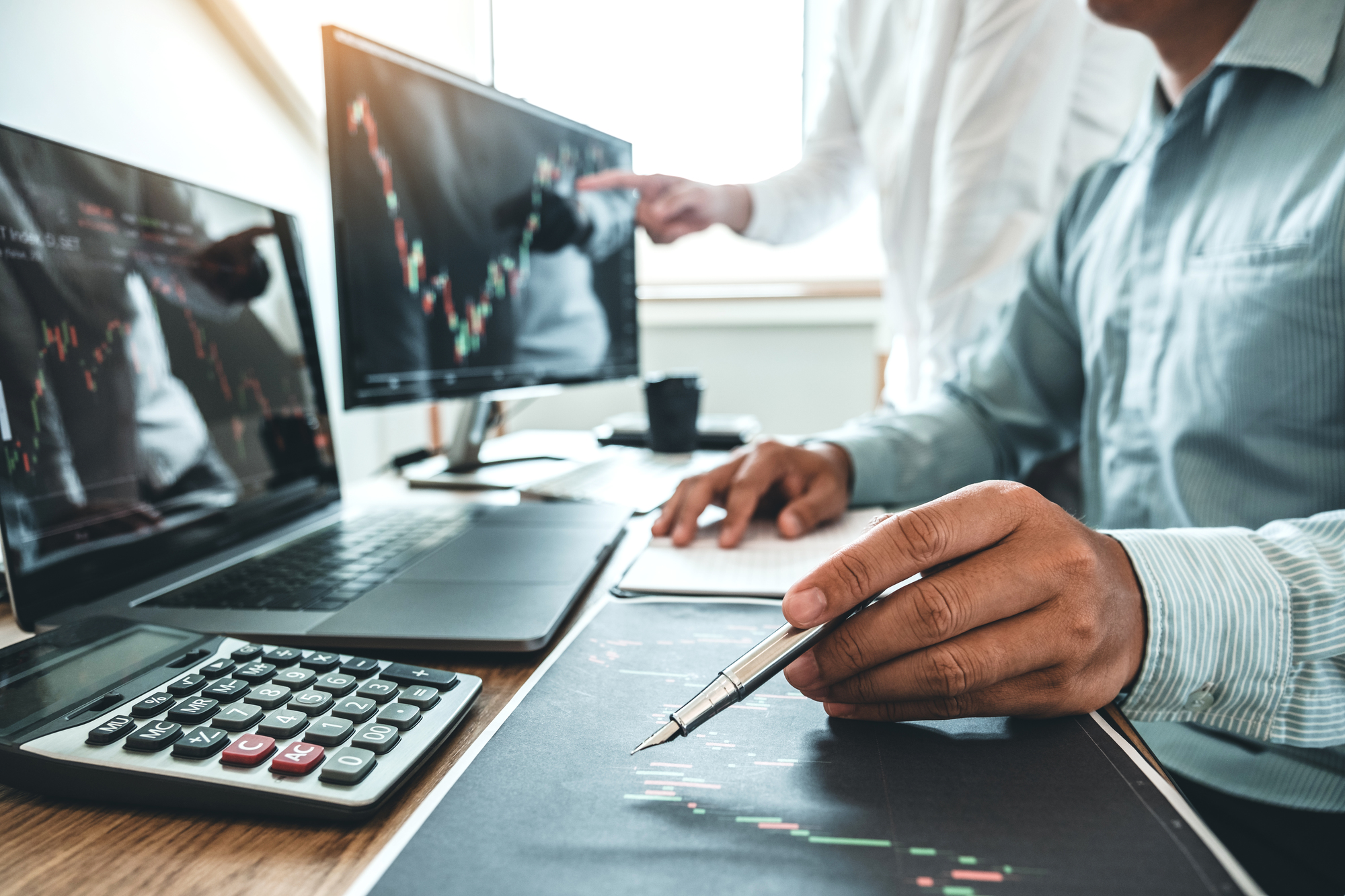 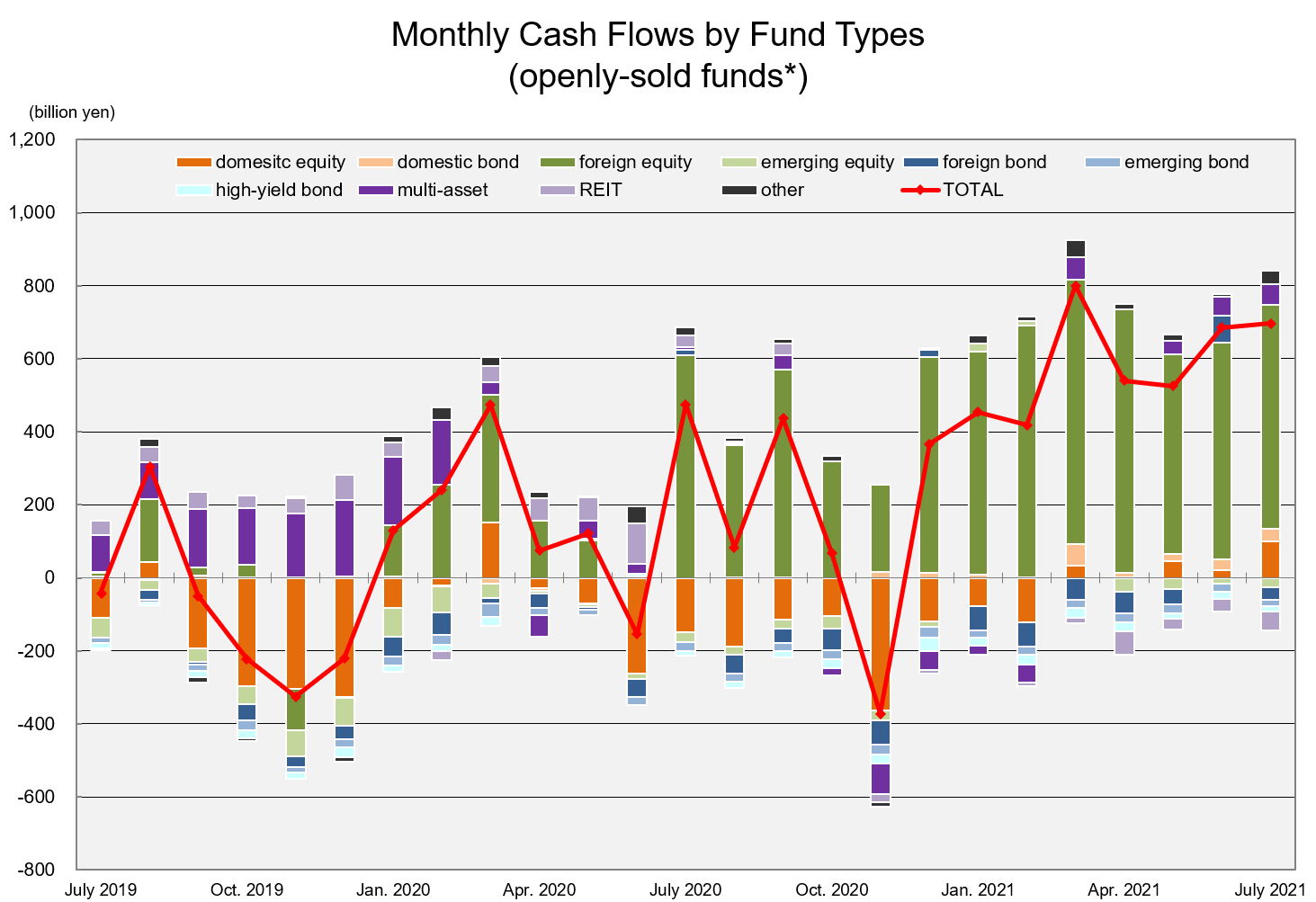 Cash flows for openly-sold toshin funds* in July were a net positive of JPY 697 billion.  Net cash flow has been positive for 8 consecutive months since December 2020, and the inflows have sustained JPY 500 billion or greater since March 2021.

Foreign stock funds have driven the trend for more than a year now.  Yohei Shimegi, Fund Analyst at MAB said, “The major trend remains the same.  If you look more closely, however, inflows to the Global/Multi-region category, which invests in a broader range of regions, seemed to be declining.  In contrast, inflows to US and North America category, more narrowly focused regions, are rapidly increasing.  This trend is due in no small part to the AllianceBernstein US Growth Stock Fund, which boasts a total series AUM of over JPY 2 trillion.”

Although not as large as the foreign equity funds, domestic equity funds also saw an inflow of about JPY 100 billion in July, owing largely to the weak domestic stock market.  A “buy on the downside” move has become an established trend among domestic stock funds.  As these investments rely on timing, domestic index funds have benefitted.

Atsushi Ohno, Chief Fund Analyst at MAB, stresses, however, that now is the time to focus on active funds.  “To navigate the current environment successfully requires a skilled fund manager.  Japanese IT and technology stocks are being pushed up in part by strong US stocks, however, finding similar results in other categories would be challenging.  It is increasingly difficult to generate excess returns on US equities when the overall market is doing well.”

Among individual funds, the top inflow recipient was “AllianceBernstein US Growth Stock Fund D Course, monthly settlement (JPY unhedged), projected dividend type”, which attracted nearly JPY 100 billion in July.  Its total net assets exceeded JPY 1 trillion and it became the largest publicly traded fund in Japan as of the end of July.  The same B Course and C Course funds ranked 7th and 9th , respectively.  As the total AUM of the series also surpassed JPY 2 trillion, as mentioned above, AllianceBernstein US Growth Stock Fund has now become one of the leading funds in Japan.

The 2nd best-selling fund was "eMAXIS Slim US Equity S&P 500" which brought in JPY 44.5 billion.  A few years ago, it would have been unthinkable for a low-cost index fund like this one to be among the top sellers.  Most of the inflow was channeled through online brokerages and a high percentage has gone to installment-type products.  In a sense, this fund is symbolic of the changes in the toshin business over the past few years.  The same series eMAXIS Slim All World Equity (All Countries) also ranked 10th among best sellers.

This month's results were marked by two extremes: funds with stable inflows and funds with rapid inflows and outflows.  This may be a reflection of the current state of the investment trust business, which has reached a turning point.