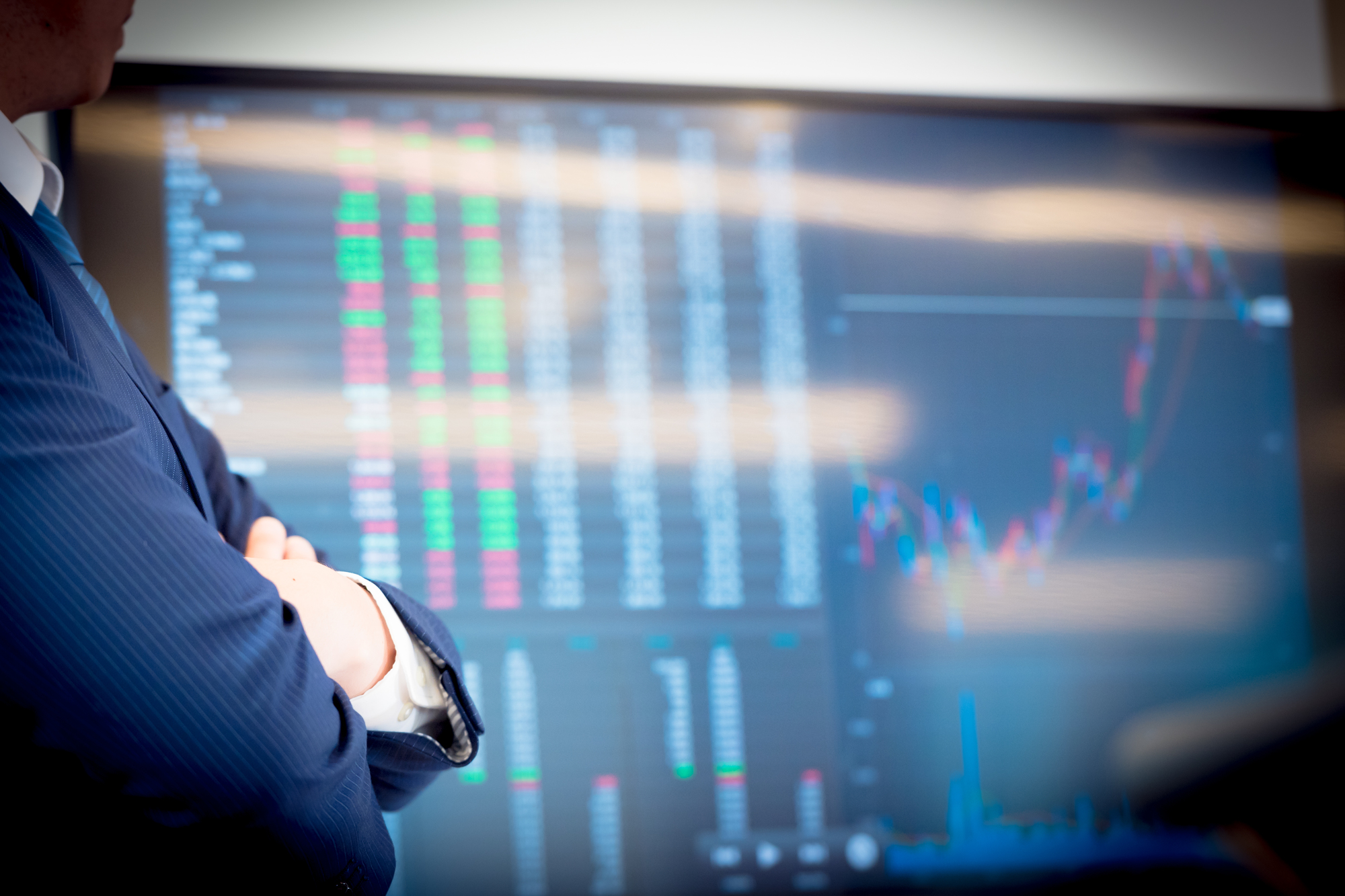 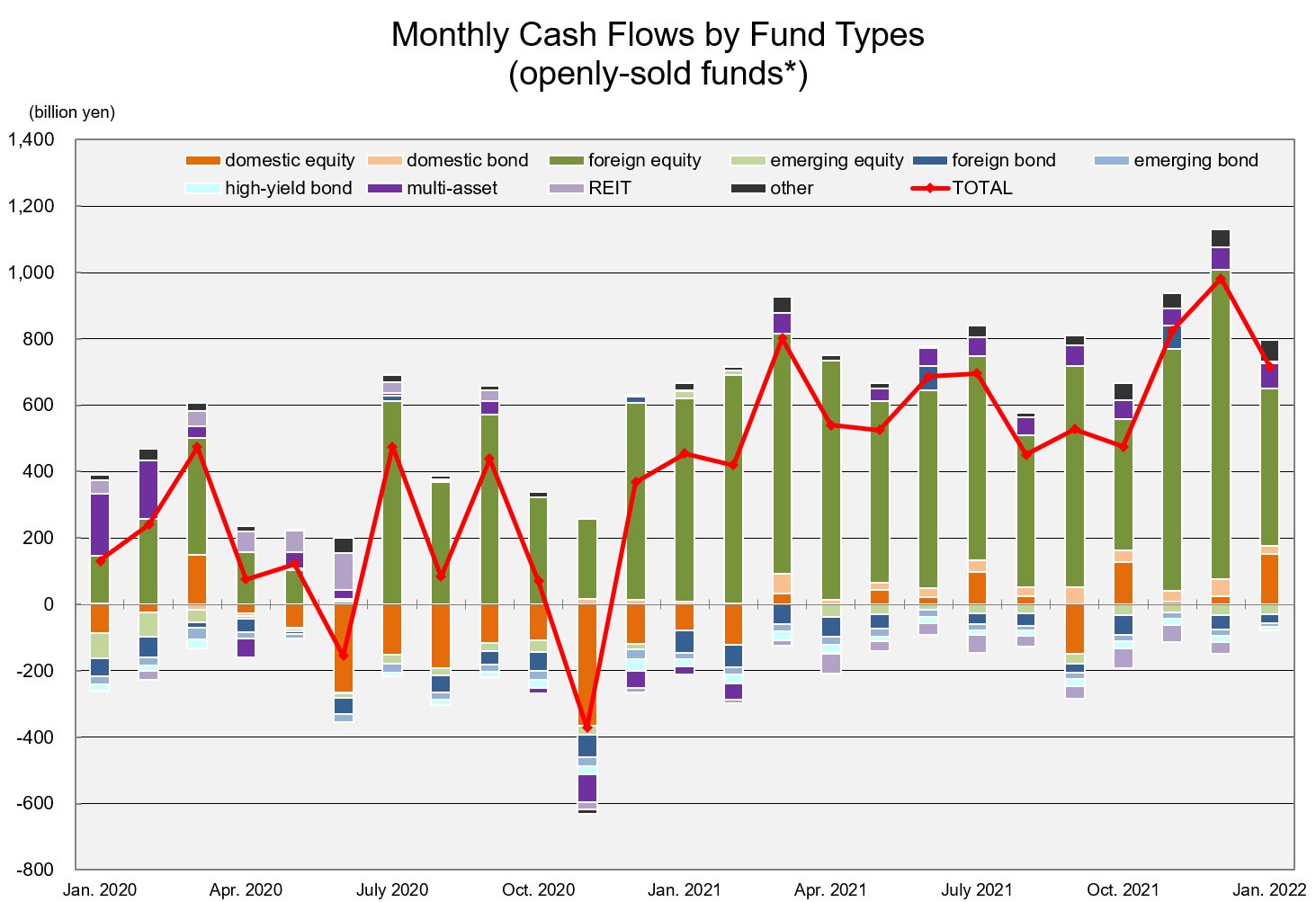 Cash flows for openly sold toshin funds* in January were a net positive of JPY 717 billion.  Although down from nearly JPY 1 trillion (982 billion) in December, inflows to the toshin market remained strong.

Foreign stock funds continued as the primary market driver and accounted for JPY 473 billion of the January inflows.

Among other fund types, multi-assets have experienced stable inflows.  Domestic stock funds saw the second largest inflow after foreign stock funds, at about JPY 153 billion, but this is thought to be due to the weak domestic stock market.  Speculative funds abound.  On the other hand, emerging stock and foreign bond funds saw outflows, though not in large amounts.

Among individual funds, AllianceBernstein US Growth Stock Fund D Course, monthly settlement (JPY unhedged) topped the list for the January inflows.  Excluding temporary inflows to limited open-end funds, the fund is far and away the top selling toshin.  In second place was eMAXIS Slim US Equity S&P500, which has continued to see stable inflows despite the somewhat unstable US stock market, perhaps due to the large number of accumulation investments by installment.  These two funds are ranked 1st and 2nd in annual inflows for 2021.

Third place went to the Fundsmith Global Equity Fund, which was launched in December last year with  JPY 118.5 billion, making it the second largest fund in 2021.  Inflows to the newly launched fund continued In January.

Of the top 10 best-selling funds in January, eight were foreign equity-type funds, demonstrating their overwhelming popularity.  However, MAB Fund Analyst Yohei Shimegi cautions, “The US stock market, which has been rising at a steady pace, is beginning to show signs of a change in direction.  This is a major concern.  The cash inflow has been so skewed toward foreign stock funds that if the stock market were to plummet, there would be a risk of a sudden outflow.”

Atsushi Ohno, Chief Fund Analyst at MAB, also noted that “Never before has there been a period of such strength in foreign equity funds.  That said, it is time to start thinking about diversification.  We have been biased toward index and growth stock funds among foreign stock types, so simply having a value stock fund, in addition to combining other categories, should have a diversification effect.”  In this regard, the 11th-ranked fund in January, Fidelity Global Undervalued Growth Equity Fund B Course (unhedged), may be a fund to watch.

Among funds suffering outflows were the top-ranked Global Prospective Fund and the 2nd Global ESG High-Quality Growth Equity Fund (unhedged).  Both were among the top inflow funds until about a year ago.  Global ESG was ranked No.1 in the annual inflow of 2020.  It is dismaying that the bias toward the Global ESG fund has reversed so quickly, as the concept of ESG is premised on long-term investment.  If the global trend in ESG investment were to prove a mere fad, the maturity of Japan's toshin market could be questioned.  The market should be watched closely.