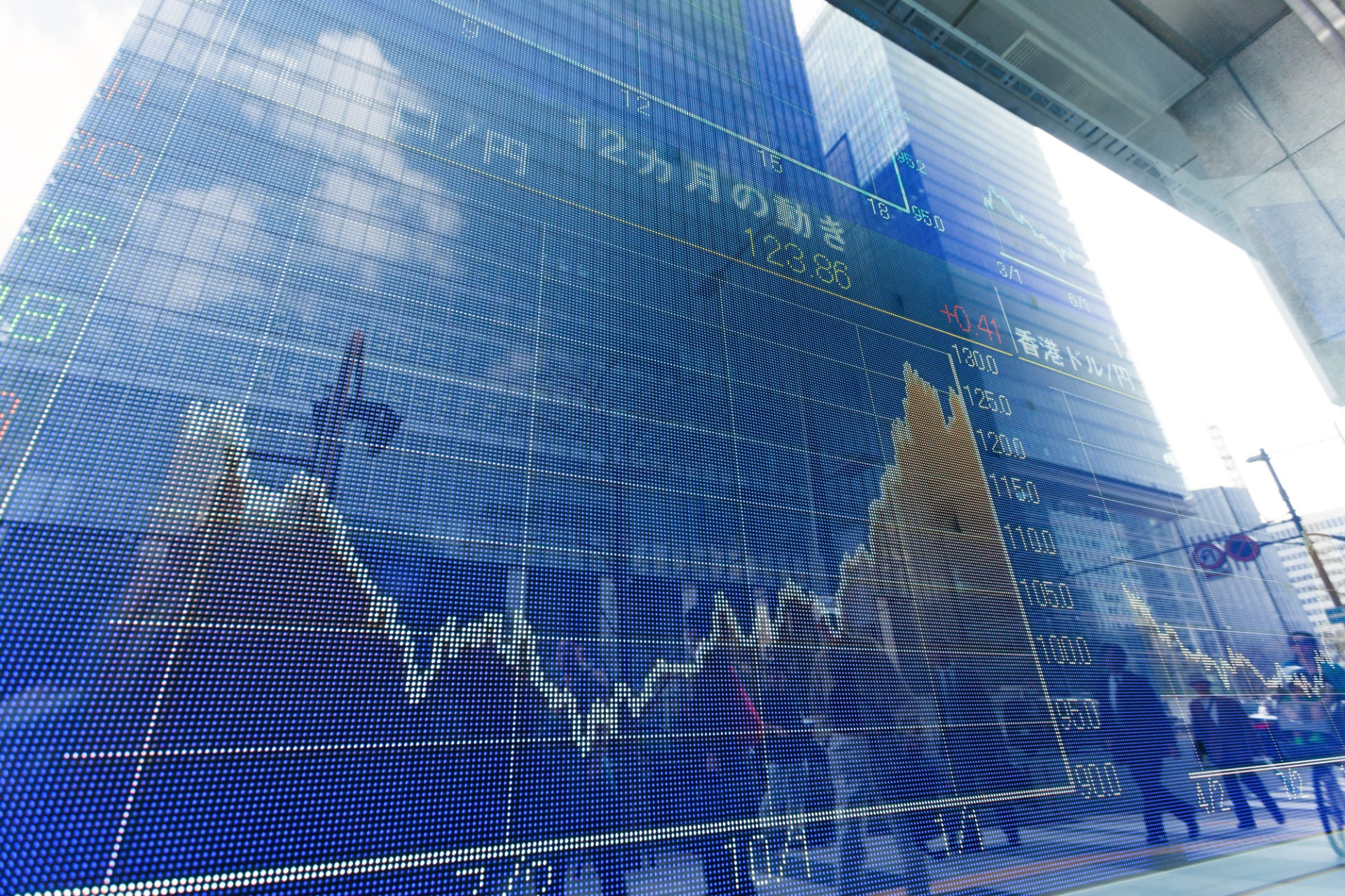 Translated from an article originally published in Ma-Do Magazine vol. 66, May 2022. 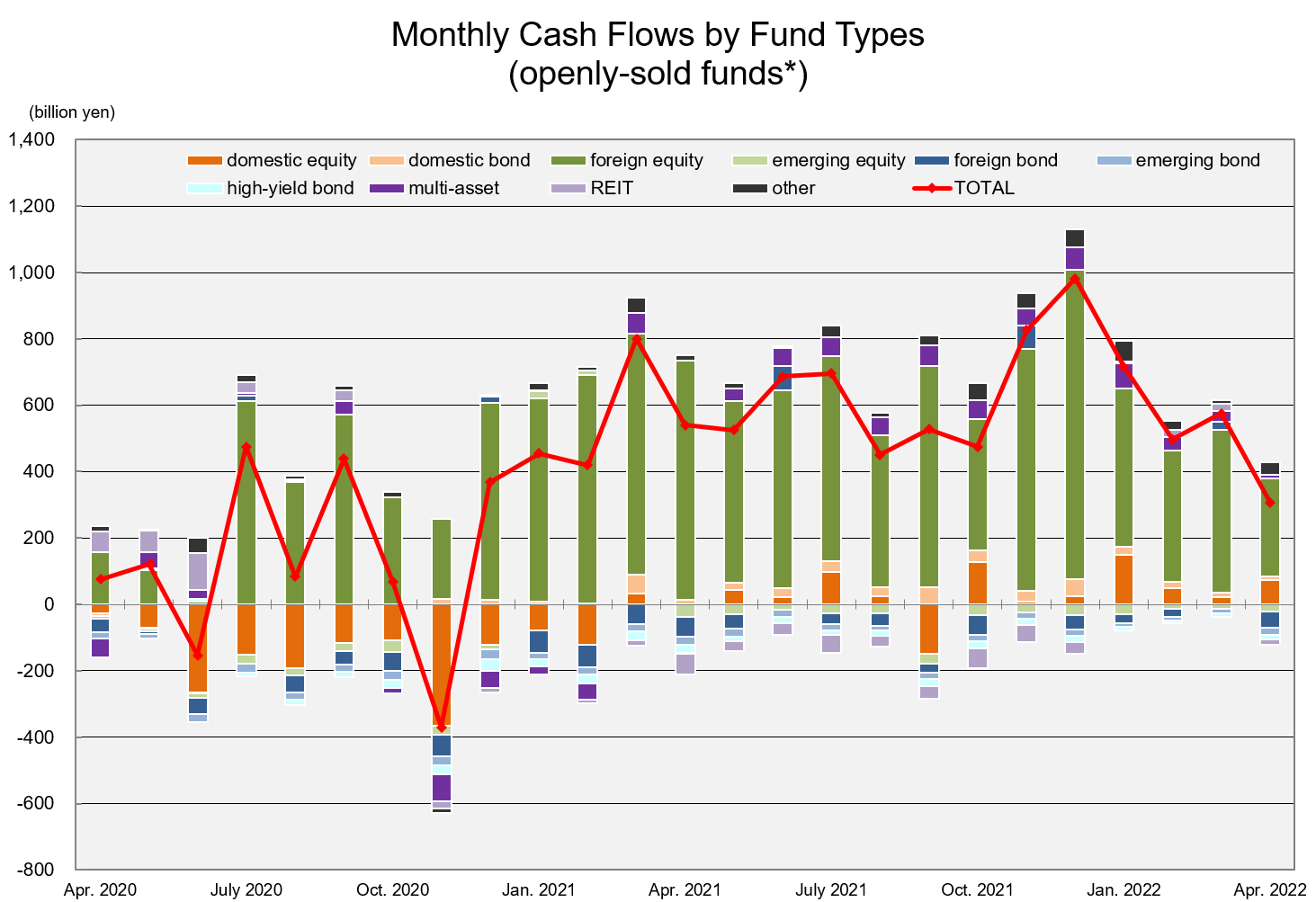 Cash flows for openly sold toshin funds* in April were a net positive of JPY 306 billion.  This marks the 17th consecutive month of fund inflows, although totals have steadily declined since peaking at nearly JPY 1 trillion in December 2021.  The continued inflow to funds, despite unstable market conditions created by the situation in Ukraine and rising interest rates in the US, may be a sign of change in Japan's toshin business indicated by the increase in accumulation or installment accounts.

Among fund types/categories, foreign stock funds continued to account for the majority of inflows, followed by domestic stock funds.  The 3rd largest inflows occurred in "other" types, which includes bull-type funds that utilize leverage, as well as inflation-oriented funds focusing on gold and commodities.

Multi-asset type funds brought in significantly less investment than in March, but still managed to maintain positive inflows.  “Although we are seeing fewer amount openings and purchases in the toshin space, the impression is that cancellations are increasing considerably.  Multi-asset funds are meant to be held for a long time, so rising cancellations during periods of market instability is cause for concern.  Since these products attract many first-time and inexperienced investors who tend to have low risk tolerance, it is possible they are unable (or unwilling) to ride out the declines and are therefore cancelling their investments,” explained Yohei Shimegi, Fund Analyst at MAB.

The same series, eMAXIS Slim All World Equity (All Countries), had the third best inflows for April.  Of the top 10 funds in April, half were index funds.  A large portion of inflows to these index funds seems to come from accumulative cash, which may support the aforementioned stable inflows into the toshin market.

One obvious takeaway from April's top seller list is that all but 10th-ranked Nikkei 225 No-Load Open were foreign equity funds.  Even among active funds, the focus is on relatively orthodox types, to the exclusion of so-called thematic funds.  Thematic funds, which not long ago were among the top inflow recipients, in April ranked in the outflow list.  In a sense, the most popular products in the current toshin market are "assured", but at the same time, they are biased toward equities in terms of category.  For that reason, "it may be time to focus on the bond-type option," said Atsushi Ohno, Chief Fund Analyst at MAB.  “Bonds are vulnerable to inflation, which may give the impression they are contrarian, but so long as yields return to their original levels, there should be a reasonable return on investment.  Although rising interest rates and inflation are currently causes for concern, they can also be seen as forces of market normalization.  I would like to see a return to the basics of building a portfolio that includes bonds.”

For the past several years, it has been possible to earn satisfactory returns by holding only foreign stocks, especially US equity funds.  This was one reason for the popularity of online securities platforms; however, as investors re-evaluate their portfolios, they may return to seeking help from professional advisors.