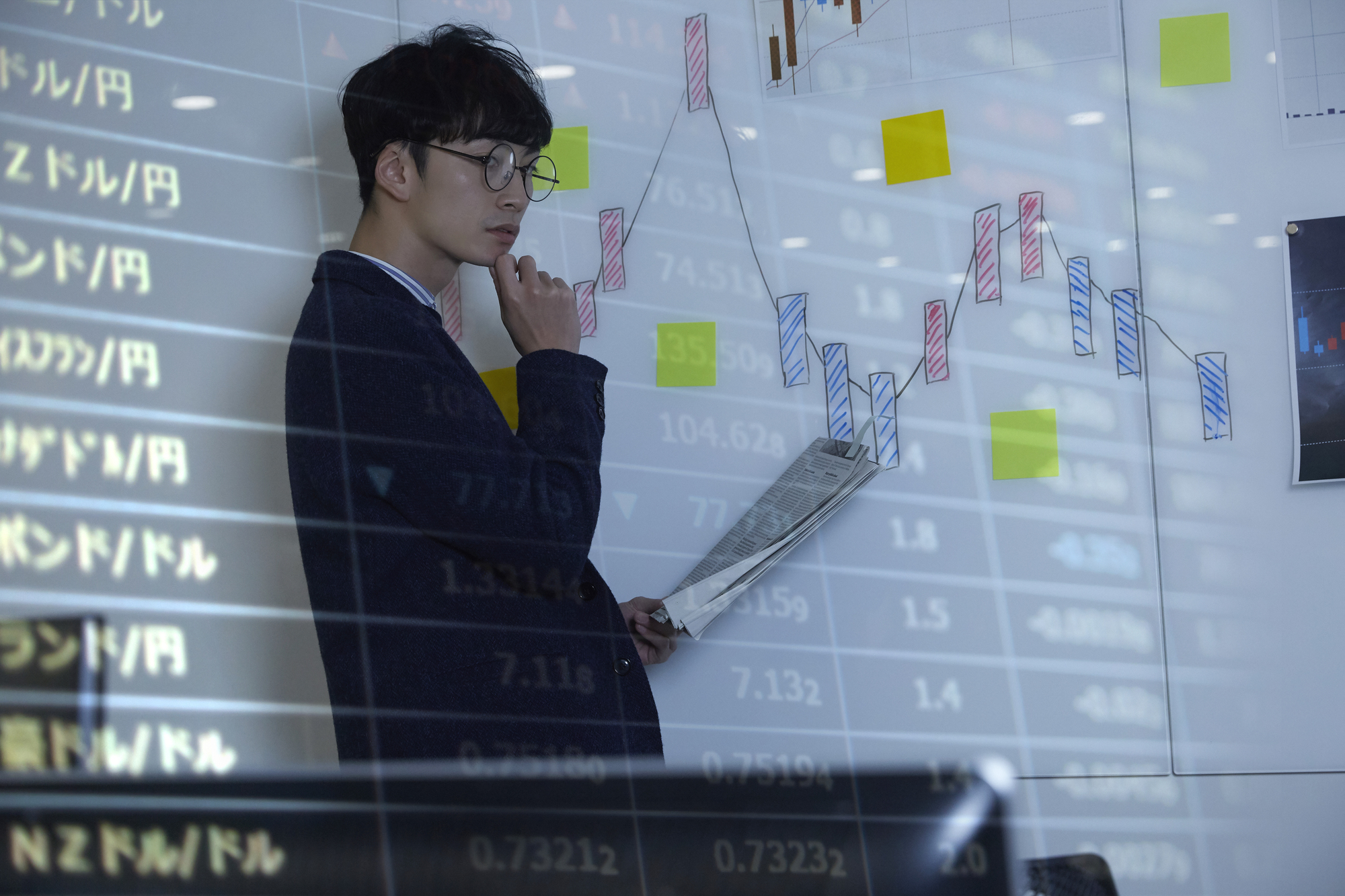 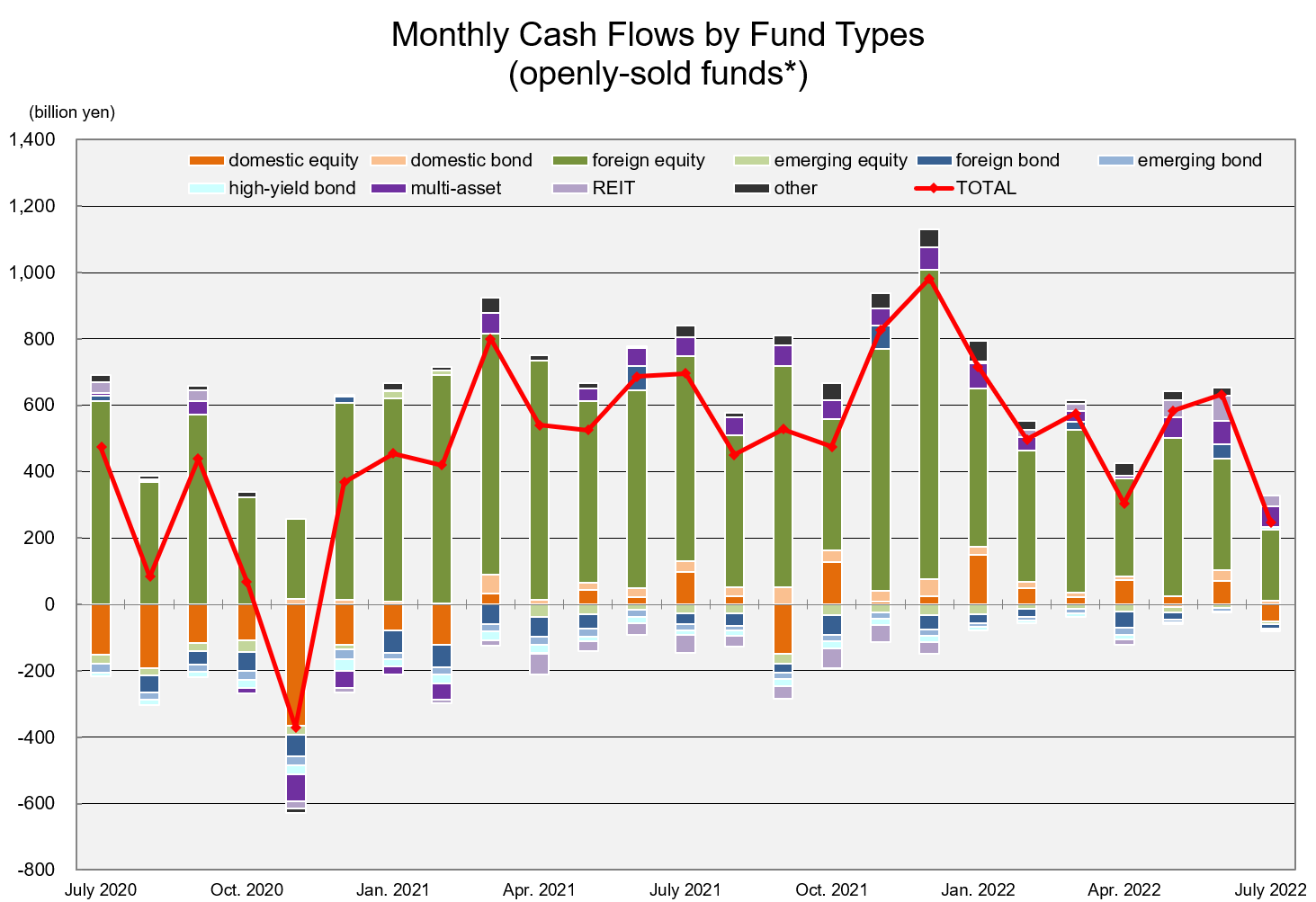 Cash flows for openly sold toshin funds* were a net positive of JPY 248 billion in July, marking the 20th consecutive month of fund inflows, albeit the lowest net of the 20-month run.  Stock markets, both foreign and domestic, rose in July, leading to some profit-taking there; however, cash to accumulation or installment accounts of foreign stock index funds helped maintain positive cash flow overall.

Among fund types/categories, while foreign stock funds continued to account for most of the inflow, the amount declined to JPY 215 billion.  Multi-asset type funds followed with JPY 60 billion, and REITs, led by J-REITs, maintained inflows for the third consecutive month.  Domestic stock funds, on the other hand, reversed direction after several months of inflow.  Domestic equity funds have been contrarians of late, sustaining inflows in a falling market and outflows in a rising market.

Among individual funds, eMAXIS Slim US Equity (S&P 500) topped the list of July inflows, followed by eMAXIS Slim All World Equity (All Countries).  In third and fourth place were Rakuten Global Equity Index Fund and SBI･Vanguard･S&P500 Index fund, respectively.  Four of the 5 best-selling funds were index-type funds.  Many are accumulative investments whose stable inflows, even in the current sluggish market, are boosting the profile of index-types.

One well-known best seller, AllianceBernstein US Growth Stock Fund D Course (monthly settlement-dividend, JPY unhedged), disappeared from the top 10 list, likely due to 0-yen dividends in May and June.  The fund is an expected dividend offering.  “It should have been expected that dividends would not be paid depending on the NAV level, but perhaps this was not communicated to investors in the end,“ said Yohei Shimegi, Fund Analyst at MAB.  “It is a fund with a proven track record, and its performance is not necessarily bad for a growth stock fund.  Abandoning growth for value based on contemporary market conditions is a mistake.  Both strategies should be embraced.”  Given that dividends returned — 100 yen per 10,000 unit in July and 200 yen in August — the question is, will cash come back to the fund?  This is undoubtedly a critical time for the fund, which has become the largest toshin in Japan.

Recently, more limited open-end funds have been launched, such as the 9th Aozora New Global Diversified Fund (limited-open type) 2022-07.  In June, GS Global Corporate Bond Target 2022-06 Limited Open Type and Mizuho Global Target Yield Bond Fund 2022-06 were among the top 10 best-sellers.  Shinya Kimura, Senior Fund Analyst at MAB, explained that “especially for bond products, it may be easier to set up new limited open-end types due to rising yields.  Base interest rates have risen and credit spreads have widened, making corporate bonds and other investments more attractive.  The limited open-end type is a buy-and-hold product, and since the currency hedging cost can be fixed until maturity, it is possible to secure a yield of about 1% even after deducting the trust charge.  It’s the right product for the times.”